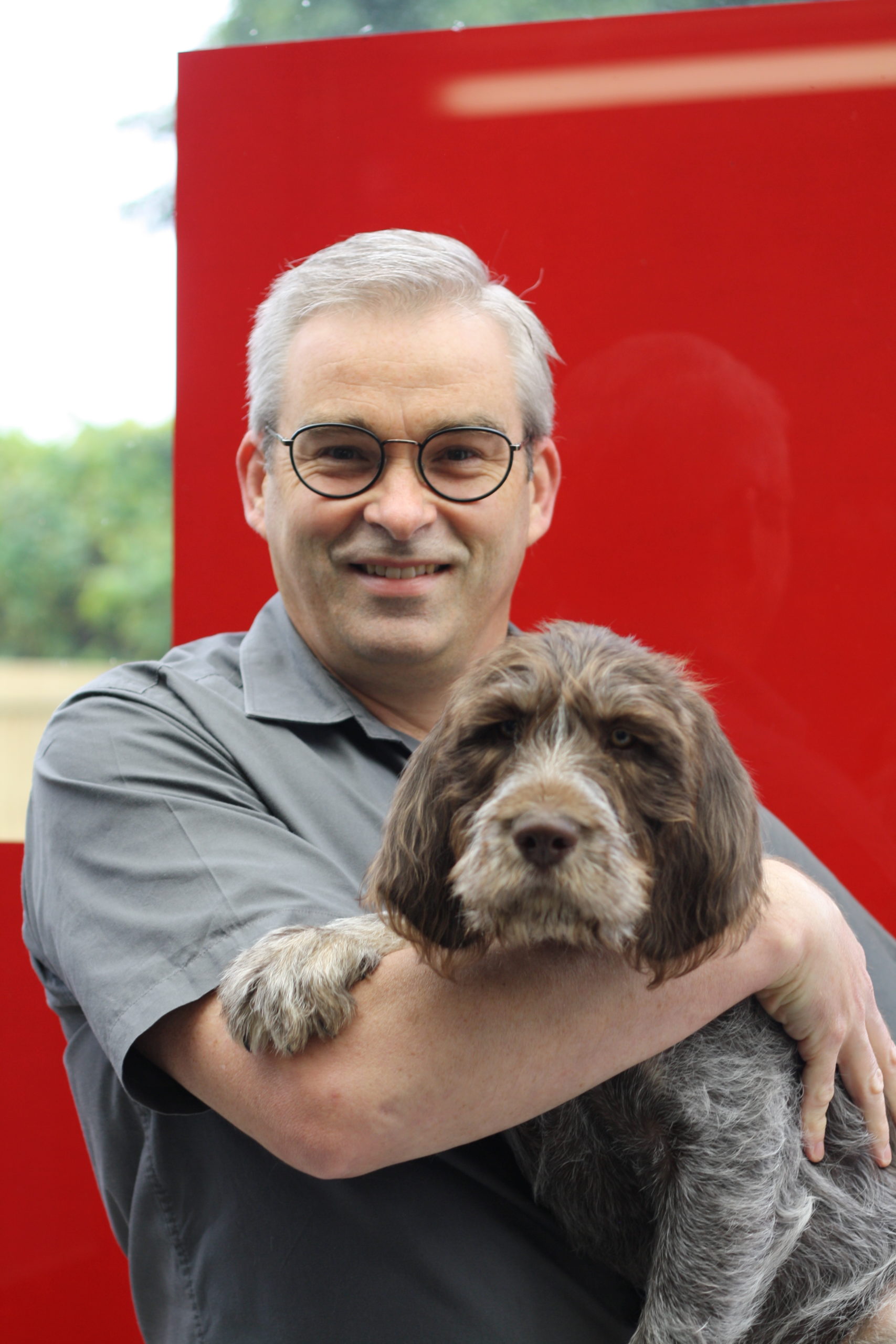 Shaun began his journey at Whitehorse in 1983 as a high school student completing work experience. Shaun returned as a university student in 1991 and worked for 2 weeks as a veterinary Student. In 1998 Shaun became a full-time Senior Veterinarian working beside Dr Peter Cullen and then in 2006 Shaun bought the practice off Peter! Shaun has just shy of 30 years of experience in the Veterinary Industry and has achieved great things during his time at Whitehorse.

Special interest: Member of Unusual and Exotic Pets Group of the AVA. Shaun has over 20 years experience with all pets, including Rabbits, Rats, Guinea Pigs, Birds and other Pocket Pets.  Since passing examinations to be admitted as a member of the Australian College of Veterinary Surgeons, Shaun’s main interest has been advanced surgery. This includes Advanced Knee surgery (stifle), TTO – Triple Tibial Osteotomy surgery, TPLO – Tibial Plateau Levelling Operations, de-Angelis suture and a range of other orthopedic surgery.

Most memorable veterinary moment:  A pug presented in respiratory distress on a particularly hot day. He sounded like a clogged up, overheated steam train. His throat was occluded by an excess of soft tissue, his nostrils were closed over and the little pockets next to his vocal chords (in his larynx) had everted. All this is called BOS – Brachycephalic Obstructive Syndrome, and it had put little “Buster” into life-threatening Heat Stroke. We gave him a “nose job” (rhinoplasty), a soft palate resection and we cut out the everted laryngeal saccules – all referred to as BOS surgery. After we cleared his airways, his energy levels increased better than they had been for years and he could breathe easy. For some years prior to surgery his loud snoring had filled the bedroom, and because Buster’s owner was used to the background noise, she had some adjusting to do, waking several times a night to check that he was OK.

Pets: Shaun has quite the mnagerie at home consisiting of 3 dogs, Teddy the labradoodle, a teacup maltese x chihuahua called Alfie & Peggy Goo a German Wirehair Pointer (from Nurse Abbey’s litter). Shaun also has a cat named Ace (who was brought in as a stray kitten) & a budgie named Borris! 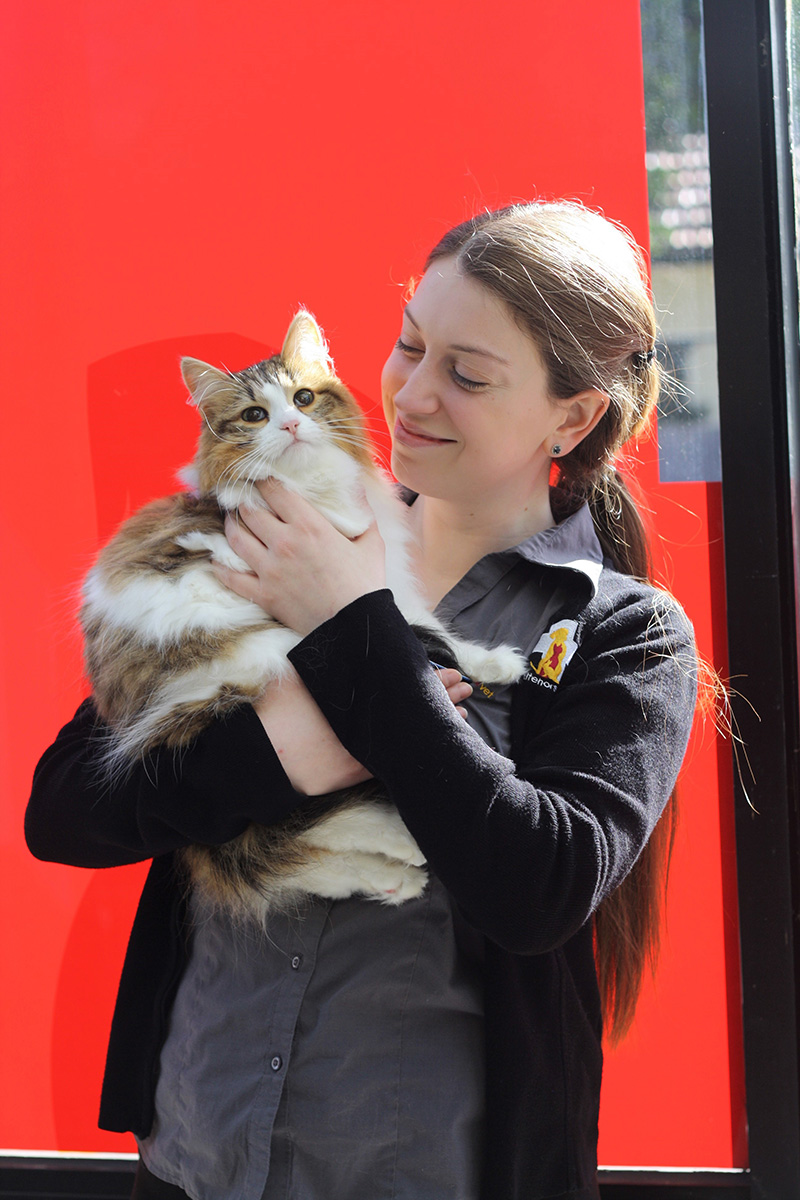 Hazel joined the Whitehorse team in 2016 as a New Graduate Veterinarian. She completed a rotational placement with the hospital during her final year of Veterinary Medicine, we all loved her so much that we simply had to have her on the team! She is now an integral team member and experienced Veterinarian having worked with us for 5 years now.

Hazel is very popular with our clients, especially those with cats! With her empathetic nature & gentle hands, she seems to have the magic touch & easily wins over the hearts of all of our feline patients.

Special Interests: Hazel has a special interest in Feline Medicine, however she enjoys seeing all Companion animals. Hazel thoroughly enjoys the daily variation of involved tasks in working as a Veterinarian. Working between Consulting, performing surgeries, working up cases with diagnostics and everything in between. Born and raised in Hong Kong, Johnny moved to Melbourne when he was 17 to pursue his childhood dream as a Veterinarian and graduated with his Veterinary degree in 2017. Since Johnny has been working as a Small Animal Veterinarian in Melbourne and became apart of the Whitehorse team in 2020.
Johnny is bilingual in English and Cantonese, he is also able to speak Mandarin.

Special Interests: As Johnny continues on his Veterinary journey, he has become more and more interested in Small Animal Medicine and enjoys solving medical puzzles. Johnny is crazy for all things cats! With a keen interest in feline medicine.

Pets: Johnny has three rescue cats bossing around the house – Kyoko, Oreo and Echo (in picture). Although it sounds like he’s a crazy cat man, he loves dogs equally but his three bosses said no 🙁 Leah started with us in 2017 half way through her Certificate IV in Veterinary Nursing. After completing her course with flying colours, she was on the look out for her next challenge.

Leah has taken on a leadership role within Whitehorse Vet & assists with setting the standard, even expanding the nursing roles we have here at the clinic – in particularly the Veterinary Technician role.

Special Interests: Leah enjoys all thing dentistry & dermatology. Any chance Leah gets, she is looking at slides under the microscope! Leah is a key player in our Veterinary Technician service, being the vets “right hand man” with their busy consulting schedule.

Pets: Leah has the beautiful three-legged Luna who is a regular skin patient here at the clinic!
Leah has recently moved out to a small hobby farm where her fur babies are constantly expanding
Two alpacas Nigel and Raymond
The lovely little Bindi, a 9 week old Koolie
And 6 free ranged hens

Personal Hobbies: Leah is a indoor plant & timber enthusiast, loves spending time outdoors away camping & 4 wheel driving.
Leah loves spending time at home looking after the farm,  her animals and  being a home maker out in the beautiful Yarra Valley. 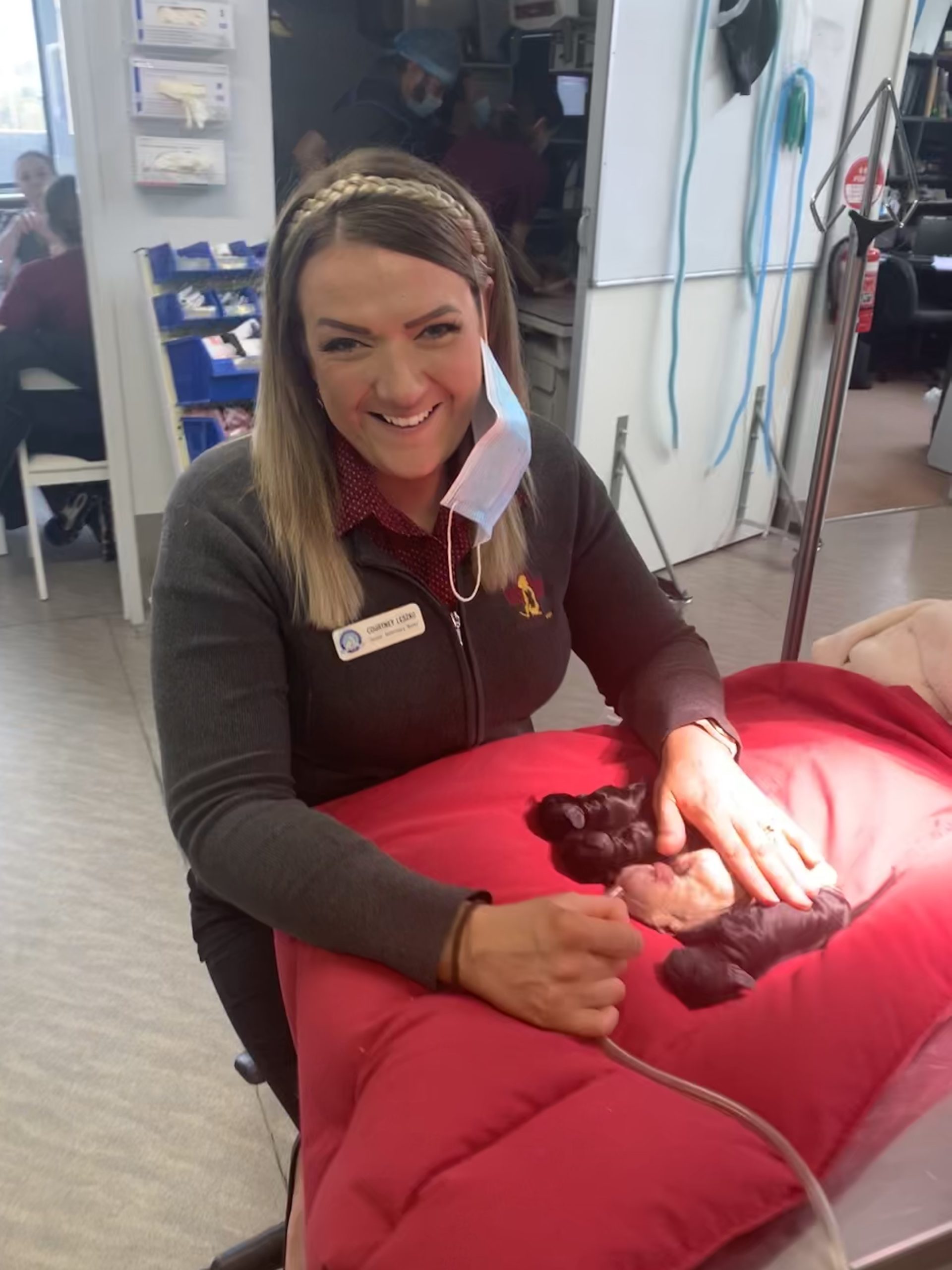 Special Interests: Courtney has a special interest in a number of different areas from; Reception & Administration, Emergency Nursing to Practice Management.

Personal Hobbies: Courtney is kept very busy between her home and work life. At home Courtney & her husband Josh have 2 children, Grayson & Caydence, they reside in their Yarra Valley home. Donna is our most senior and long-term Veterinary Nurse who is a very familiar face to all our clients and a valuable member of our team.

Special interest: Donna has an interest in a number of different areas, including; Surgical Nursing, dentistry, Weight Management, behaviour and training.

Pets: Donna’s Dogs lead a very active life on her property with the horses. They get plenty of long walks and actively participate in professional agility and tracking trials with plenty of medals, trophies and ribbons to show for it! Siobhan started at Whitehorse in 2015 as a student whilst completing her Certificate IV in Veterinary Nursing. She soon completed her Certificate and is now a fully Qualified Veterinary Nurse. Living in Healesville, Siobhan has always been passionated about animals of all shapes and sizes, especially native Australian Wildlife.

Special Interests: Siobhan enjoys many aspects of nursing which include reception work, basic care advice and surgical nursing. She would like to persue her interest in wildlife and has recently completed an intensive Nursing Dentistry workshop .

Personal Hobbies: Siobhan enjoys art and drawing in her spare time, as well as caring for her large veggie garden & cooking the freshly grown produce. Hannah joins the Whitehorse family as a senior veterinary nurse with 15 years of experience, spending majority of her time as practice manager in general practice. She also has experience in specialist veterinary environments including ophthalmology, surgery and internal medicine and oncology.

Hannah spent time as a state division committee member and secretary of the Veterinary Nurses Council of Australia and is passionate about the education of nurses.

Special Interests: Hannah loves all areas of veterinary nursing but particularly bonding and forming long term relationships with clients and their pets. She enjoys anaesthesia and challenging medical cases. Hannah has a passion for the training and mentoring of junior nurses.

Pets: Hannah has a cheeky and lively little Welsh Terrier named Colin. You will often meet him out for his walks with Hannah in the neighbourhood.
She also has a stunning Siamese cat who is very close to Hannah’s heart named Greg Boy and a very energetic (and vocal!) Oriental Shorthair cat called Judy Clementine.

Personal Hobbies: Hannah’s favourite thing to do is reading, especially with her precious cats on her lap. She loves spending time with her big family and walking her dog Colin around her beautiful home suburb of Blackburn, often running in to clients. 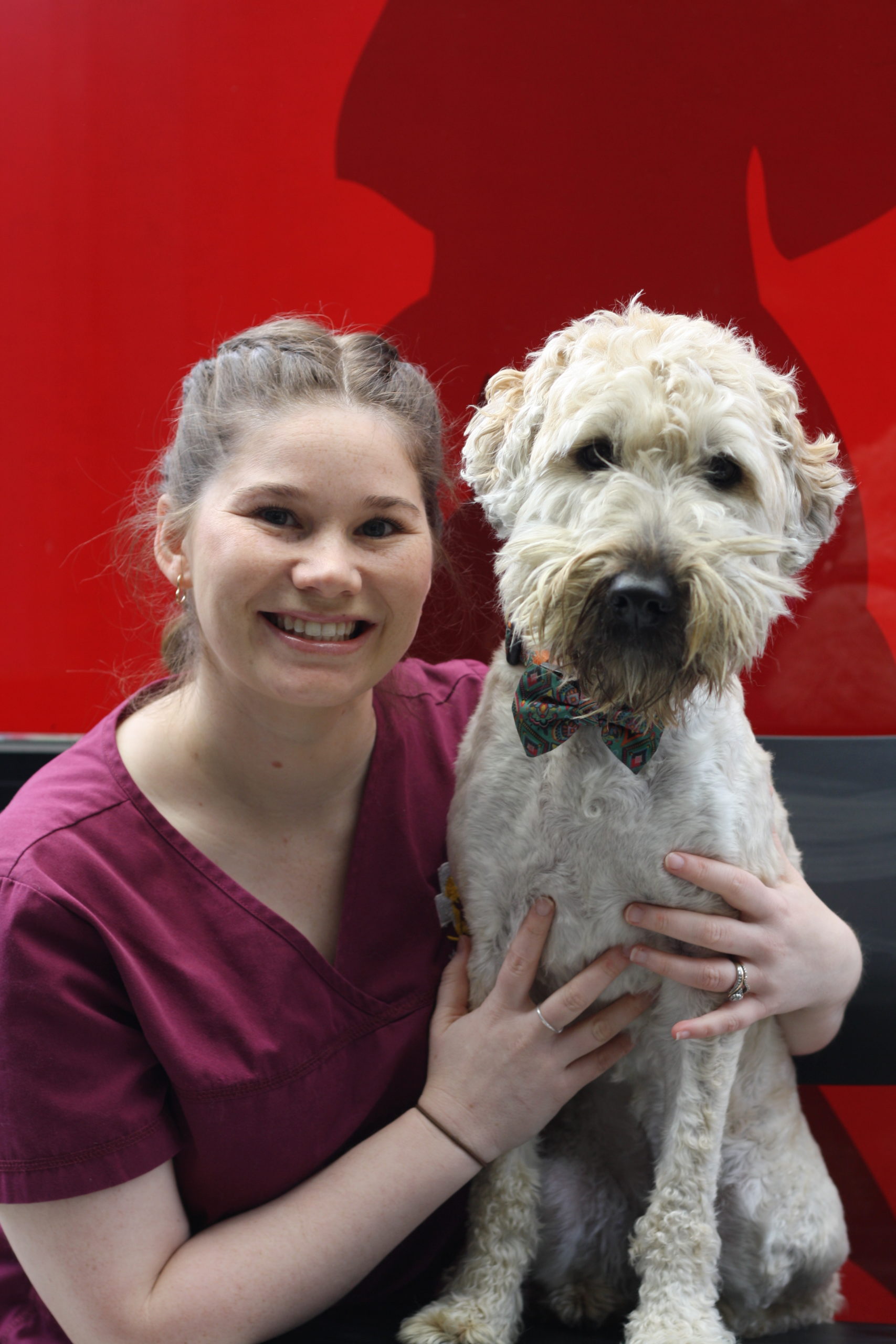 Rachael joined us in January 2020 as a Senior Veterinary Nurse after spending 8 years up the road at Blackburn Animal Hospital.

Pets: Rachael has a Soft-coated Wheaten Terrier Ivy & a DSH Winston – these two are totally head over heels for one another.

Personal Hobbies: Rachael enjoys spending her time knee deep in home renovations, gardening & has been a netballer since the day she was born! Emma began her journey here at Whitehorse in 2018 as a volunteer wanting to gain vital skills to start a career in Veterinary Nursing. The team loved her so much that it was not long after, Emma was offered a trainee position. Emma has now completed her Certificate IV in Veterinary Nursing at Box Hill Institute & is currently studying a Diploma in Science with the hope of getting into Veterinary Medicine in the coming years. Annabel began her journey here at Whitehorse as a Veterinary Nurse Placement Student in 2018. Annabel made such an impression that we just had to have her join our team on a permanent basis, she has since completed her Certificate IV in Veterinary Nursing at Box Hill Institute.

Special Interests: All aspects of surgical nursing, pathology & most of all anything reproductive! Lena was born in New Zealand and has been in Australia for 9 years. She has recently joined the team in November of 2020 after moving with her partner from Queensland.
Qualifications: Certificate IV in Veterinary Nursing
Special Interests: Lena enjoys all things nursing, in particular assiting with medical patients on thier journey to recovery. She also enjoys surgical nursing and cytology.
Pets: She has a 8 year old mastiff who is a total sweetheart and a 5 year old english cocker spaniel with a brilliant zest for life.
Personal Hobbies: She enjoys weekend getaways and any excuse to travel. She absolutely loves horse riding and cooking for friends. Sandra joined our team in August 2020 as our next Trainee Veterinary Nurse.

After a very impressive interview, it was clear Sandra was going to give our clients & their pets EXTRA special attention.

Sandra is currently studying & working towards her Certificate IV in Veterinary Nursing.

Special Interests: Sandra is loving anything & everything surgical nursing, with a keen interest in Pocket Pets. 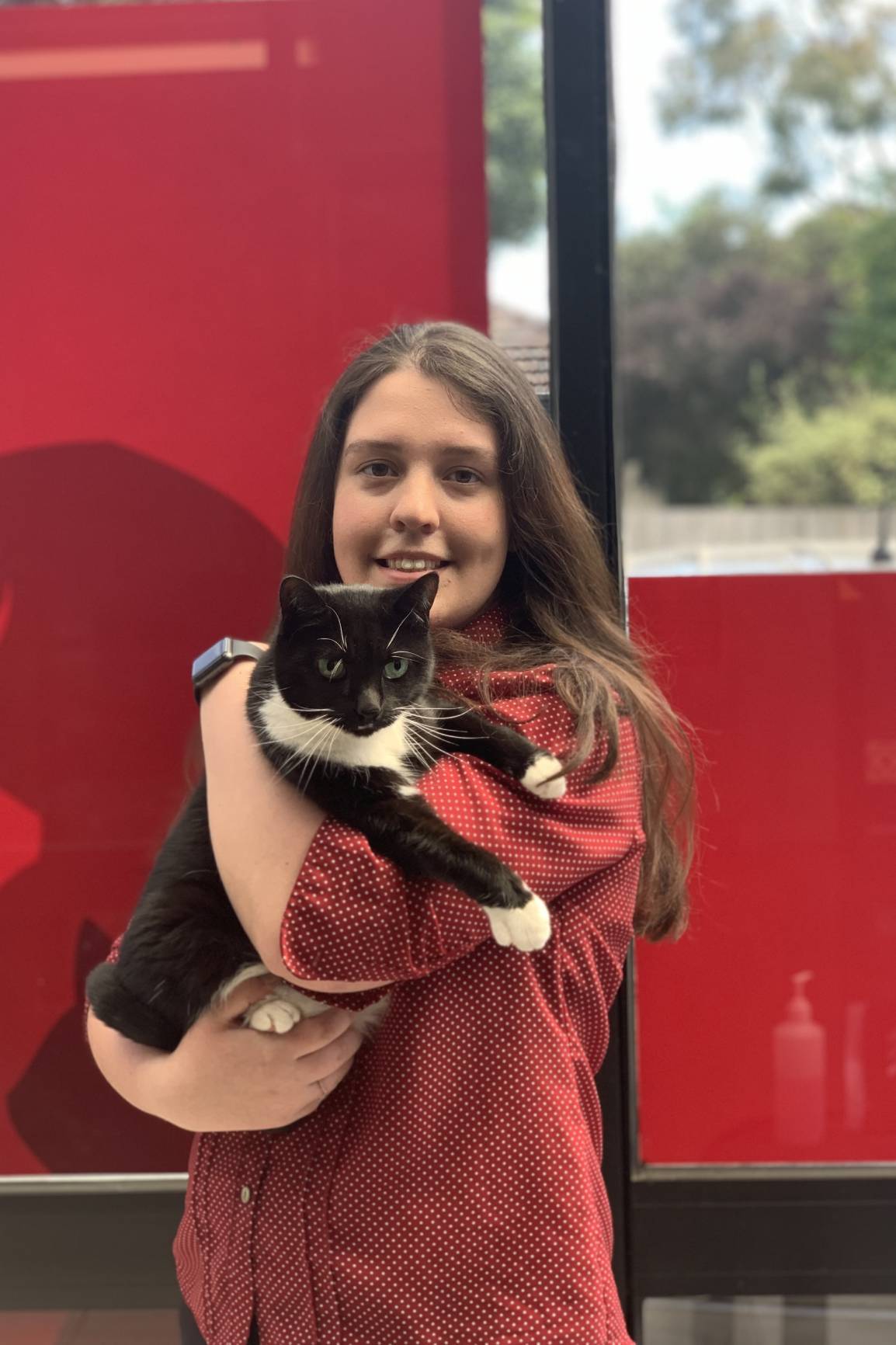 Whitehorse Veterinary Hospital is dedicated to providing the best possible health outcomes for your pet. We will provide advice and care that aligns with best practice.

We recognise the positive impact pets have on the lives of their owners and endeavour to improve the relationship between owners and their pets.

Caring for the Environment

People and pets have a large impact on the local and global environment. We seek to educate owners on environmentally responsible pet ownership.